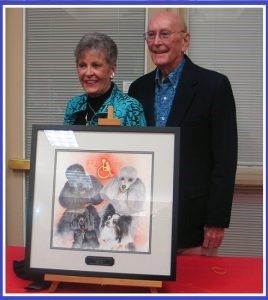 Pets on Wheels of Scottsdale, Inc. was founded in 1990 by Neal C. Jennings, a retired civil engineer – with the help of his wife, Anne.

With the blessing and cooperation of the City, Neal started the pet visitation therapy program with two dogs and one nursing home. The premise was to provide a superior service to a limited area, rather than spread less frequent pet visits throughout the valley.

Neal and Ann are shown here with a collage of their past therapy dogs, Jacques & Jill and Ronnie & Clyde.

The water-color painting, created by Scottsdale artist, and member of the POW Board, Diane Bykowski, was presented as a gift from the POW volunteers at a retirement reception October 25, 2012. 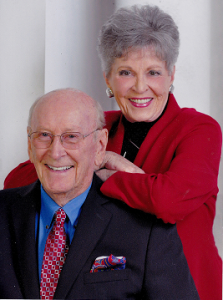 Neal married the love of his life, Anne Elizabeth Austin, 40 years ago.

In 1988, Neal and his poodle, Jill, appeared on the David Letterman’s show Stupid Pet Tricks. In 1989, he and Anne relocated to North Scottsdale, Arizona, where he immediately became involved in volunteer service.

With over 30,000 hours of volunteer service, Neal was honored with many awards, including the Golden Rule Award, Ageless Hero Award, the President’s Lifetime Achievement Call to Service Award, and the Hon Kachina Award, Arizona’s most prestigious award for volunteer service.

Upon Neal’s retirement from Pets on Wheels in 2012, Scottsdale Mayor, Jim Lane, presented a proclamation designating October 25 as Neal Jennings Day in Scottsdale. Neal’s two poodles, Jacques & Jill, were inducted into the Arizona Animal Hall of Fame by the Arizona Veterinary Medical Association, for their service to humans. 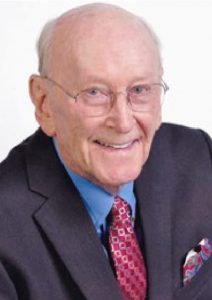 Neal passed away on October 2, 2018 at the age of 95. He was the son of Murel Elizabeth Fritz and Marion Roy Jennings who both died when he was young. He was preceded in death by his brother, Roland Fritz Jennings of Farmington Hills, Michigan and his stepmother; Beulah Farris Jennings of Fremont, Nebraska.

During World War II, Neal served 3 years in the Army Signal Corps, stationed in New Guinea and the Philippines.

He graduated from the Iowa State University as a Civil Engineer and received a master’s degree in Engineering Administration from The George Washington University.

Neal began his engineering career with the Bureau of Reclamation and later as the Area Hydrologist for the Bureau of Indian Affairs in Gallup, NM. In 1955 he joined the Federal Power Commission (later to be the Federal Energy Regulatory Commission) in Washington D.C., where he served as Director of the Division of Hydroelectric Power Resources. He was Chairman of the Federal Inter-Agency Subcommittee on Hydrology.

Throughout his years, Neal devoted much time serving others – as an Elder in the Presbyterian Church, President of the Federal Power Commission Employees Association, founder of a Federal inter-agency quit-smoking program, Purple Martin Bird Club, a unique home-to-home billiards club in Maryland and took an active role in the Homeowners Association where he lived. Neal is survived by his beloved wife, Anne, as well as the children of his first marriage, William, Charles, and Elizabeth.